Unveiling
Just before 3 p.m. on Wednesday, March 13, a group of local performing artists and dancers revealed the new art bus with a flash mob at DART Central Station. Ashworth orchestrated the event and debuted his new single, “Move”. Staff and board members from DART and the Greater Des Moines Public Art Foundation joined waiting bus riders, dancers and artists at the unveiling. Video and photos for media use are available upon request.

“We were excited to think outside-the-box on this special unveiling of the ninth art bus in the series,” said M. Jessica Rowe, director of the Greater Des Moines Public Art Foundation. “Not only will artist Marianne Fairbanks’ art enrich the lives of people across the region as the bus travels among DART’s member communities, but we were also able to share a special artistic experience with DART riders today. Special thanks to MarKaus and the dancers that joined him to put on this incredible performance.” 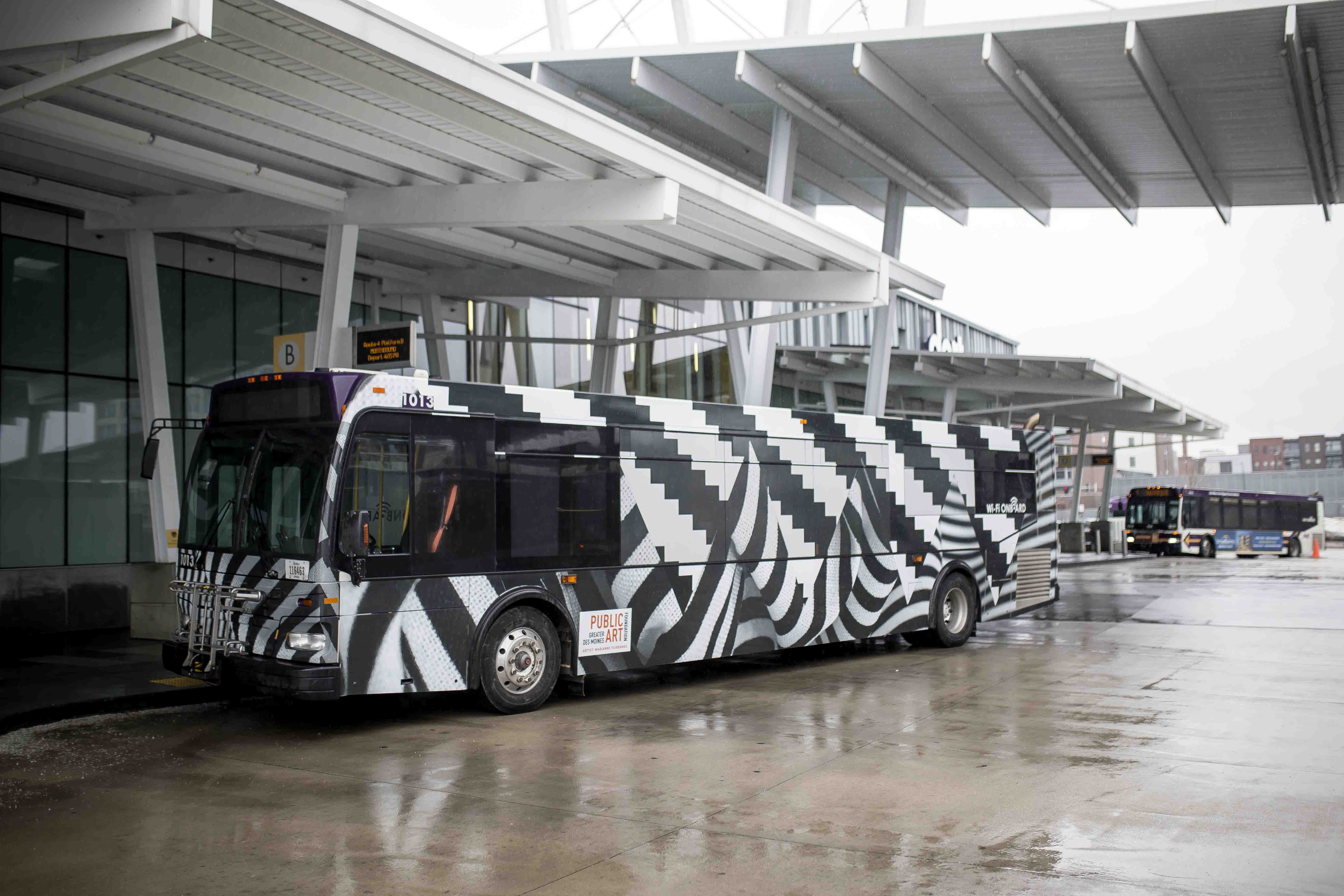 Much of Fairbanks’ recent work focuses on the intersections of weaving, mathematics, and technology. These themes can be found in her design for the art bus, as Fairbanks elaborates, “My work pays homage to sophisticated textile traditions including age-old indigenous processes in form-making and domestic hand-spun textile production. It is equally informed by the Platonic geometry used in architectural forms and sculptures pioneered by American architect Buckminster Fuller. Mathematics is at the heart of these systems of logic – both pliable textiles and Platonic solids – and serves as the springboard for bold, material-based explorations. Between the inflated scale and bold patterns this work destabilizes conventional gender based value systems of hard and soft form-making, and encourages a deep engagement with our material world.”

Fairbanks is an assistant professor in the Design Studies department at the University of Wisconsin – Madison.  She received her MFA from the School of the Art Institute of Chicago and her BFA from the University of Michigan (BFA). Her work has been shown nationally and internationally in venues including The Museum of Art and Design, NY, The Museum of Contemporary Art in Chicago, The Smart Museum of Art, Chicago, and Museum London, Ontario.  Fairbanks is a founding member of Mess Hall, an experimental cultural space in Chicago, and co-founder of Noon Solar, a small business that made wearable solar technology to charge personal electronics.

© Copyright 2020, DART - Des Moines Area Regional Transit Authority
Information found on this website can be provided in an alternative format upon request. Please contact Customer Service at 515-283-8100 to speak to a representative or email dart@ridedart.com. DART will do its best to provide the requested alternative format within a reasonable timeframe.
Trip Planner
Next DART Bus
Bus Stop Finder