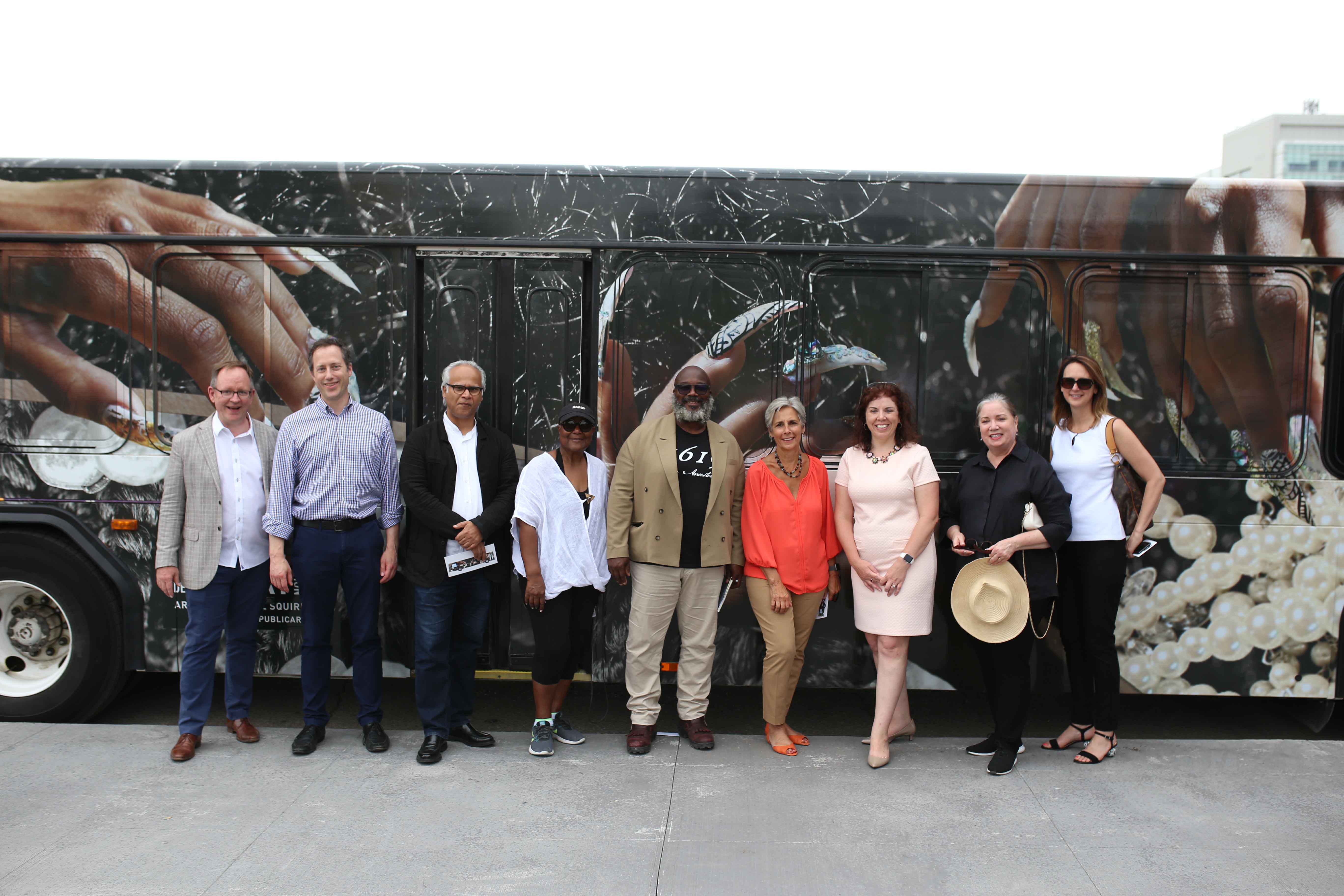 Beginning at 1 p.m. today, a group of representatives of the Greater Des Moines Public Art Foundation, DART, and local performing artists and dancers revealed the new art bus with an event at Hansen Triangle. Following traditional statements, the Greater Des Moines Public Art Foundation and Squire presented $500 awards to Art Force Iowa, CFUM (Children Family Urban Movement) and Urban Dreams. They will use the funds to purchase bus passes, reducing the transportation barrier for youth, families and people in-need who they serve in the Greater Des Moines region. Then, DART staff revealed the bus following a poetry reading by Daron Richardson. The Jordan Gregory Dancers performed immediately after the bus was unveiled. The celebration closed with an electrifying performance by MarKaus. Video and photos for media use are available upon request.

“We wanted the unveiling of the tenth bus in this series to be a total artistic experience,” said M. Jessica Rowe, director of the Greater Des Moines Public Art Foundation. “We’re excited that this bus will enrich the lives of people across the region as it travels on routes throughout DART’s network. But, we also want to recognize that through the inclusion of bus passes to Art Force Iowa, CFUM (Children Family Urban Movement) and Urban Dreams. This art bus will also have a positive impact in the lives of children/adults that use these organization’s services every day.”

Mitchell Squire describes his art for Multiple Black as a celebration, “[The design] illustrates a design made from an assemblage and collage of original photographs. The images include a base layer of dark tightly curled strands of hair combined with gold jewelry and pearls on the left side, and “parts” in the hair and freshly manicured and adorned nails on the right side of the bus.

This is a celebration of the artistry and style fully expressed in multiple ways in the black community.”

Squire is an artist and educator whose practice encompasses architecture, visual art, and the study of material culture. He has mounted solo exhibitions at CUE Art Foundation (NYC), White Cube (London), Bemis Center for Contemporary Art / Carver Bank (Omaha), and the Des Moines Art Center, as well as many academic institutions. His work has appeared in signature group exhibitions in Des Moines, and nationally at Richard Gray Gallery (Chicago), Lesley Heller Gallery (New York), Sanitary Tortilla Factory (Albuquerque),. He has completed residencies at the Skowhegan School of Painting and Sculpture (Maine), Ox-Bow School of Art and Artists’ Residency (Michigan), Banff Centre for Arts and Creativity (Alberta, Canada), and Cannonball (Miami), and has also been an invited participant in educational programs at Museum of Modern Art (NY), New Museum (NY), Pérez Art Museum Miami, and La Biennale Architettura di Venizia 2014. His works appear in public and private collections worldwide, including the permanent collections of the Des Moines Art Center and the Minneapolis Institute of Art. A nationally recognized educator in the field of architecture, Squire currently holds the position of Professor of Architecture at Iowa State University, where he took both B.Arch and M.Arch degrees. He twice received honors for his teaching from the Association of Collegiate Schools of Architecture (ACSA), in 2005 and 2009, and among his published works are the poetic narrative “Paris Done Burnt!” in White Papers, Black Marks: Architecture, Race, and Culture (Athlone) and the object collection “cultureWARE:  Implements of Desire; or EAT THIS!” in Eating Architecture (MIT). He has been a visiting professor at the University of California Berkeley (2012 and 2015), the University of Michigan (2009), and the University of Minnesota (2000), and has served a 3-year term as External Examiner at the Graduate School of Architecture at University of Johannesburg, South Africa (2014-2016). He has lectured widely in the US and abroad. His work is currently on view at the Minneapolis Institute of Art for the exhibition “Growing the Collection: Drawings and Collage, 1960 to Now” (Dec 22, 2018 – Sept 1, 2019).

Information found on this website can be provided in an alternative format upon request. Please contact Customer Service at 515-283-8100 to speak to a representative or email dart@ridedart.com. DART will do its best to provide the requested alternative format within a reasonable timeframe.
© Copyright 2021, DART - Des Moines Area Regional Transit Authority
Trip Planner
Next DART Bus